Will the Carry Trade Ride Again?

A PDF version of this commentary can be downloaded here.

An interesting map has been floating around the last week or so.  Constructed at The Telegraph, it shows the massive disparity between global interest rates. 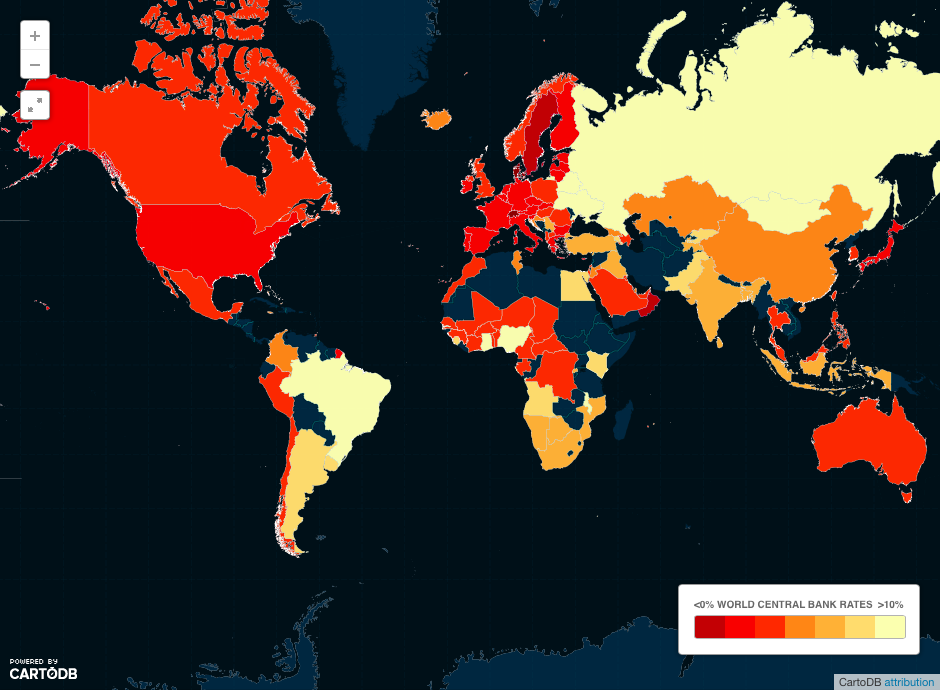 In it we can see the massively depressed rates of most developed countries and the sky-high rates of Brazil and Russia.  Accompanying this picture is the tag line: “how central banks have lost control of the world.

But what the image fails to capture is the differences between what is happening in Europe and what is happening in the US.  When the Swiss National Bank imposed negative interest rates in December, they took a deep gamble: a bank run versus potential deflation.  With no imminent bank run, it appears their gamble paid off.  And, theoretically, opened the door for other central banks to consider a negative interest rate policy to avoid their own deflationary woes.

This stands in stark contrast to US markets, where participants expect a rate rise sometime in 2015.  This has led to a continued rise in the relative rate differential between the US yield curve and the Euro area yield curve. (Note: There is no broad Euro area yield curve; the curve data is provided by the ECB and is an estimate based on AAA-rated euro area central government bonds.  Technical notes can be found at https://www.ecb.europa.eu/stats/money/yc/html/technical_notes.pdf) 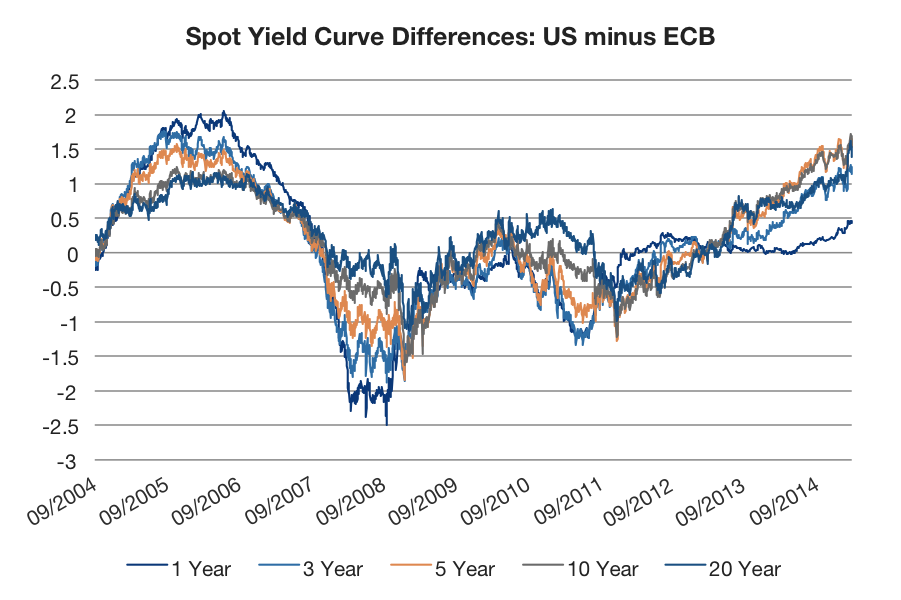 Presently, the relative spot difference has an interesting curvature, with little benefit to going beyond 5 years in maturity to capture a relative spread. 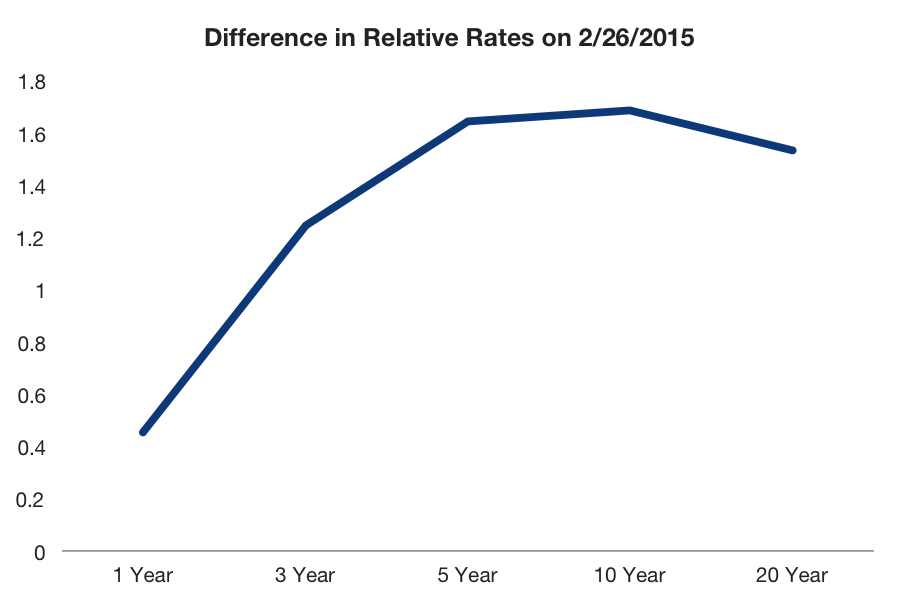 Now, the economic theory of uncovered interest rate parity (“UIP”) tells us that investors should be indifferent to interest rates available on bank deposits in different countries.  If you earn a higher yield on a foreign deposit then that currency is expected to depreciate in value relative to the dollar.  In other words, the relativity of yields ultimately shouldn’t matter.  In this case, we should expect the dollar to depreciate against the euro by about 1.6% per year over the next 5 years.

However, the long-standing success of the carry trade (investors borrow in low-yielding currencies and lend in high-yielding currencies) says otherwise.  Now, 2008 may have proven that such a strategy may be equivalent to the proverbial “picking up pennies in front of a steam roller” – but when it works, it works.  With the potential for ex-US rates around the world to start going negative to fight deflation risk, will the carry trade ride again?

Now, if we believe in UIP, this can be explained away by an expectation that the euro to appreciate in value against the dollar.  This long-term expected appreciation, however, may be easily dwarfed by short-term variance in spot exchange rates: the euro fell by approximately 20% against the dollar in 2014 alone.  Ironically, this may be due to the carry trade itself: investors will have to sell euros and buy dollars to implement the trade.

If the Federal Reserve increases rates while foreign central banks set a policy of negative rates, we could see increased demand for U.S. Treasuries – which would, ironically, drive U.S. rates down.

Looking at the U.S. Yield curve dynamics over the last year, we can see that while long rates have fallen precipitously, short-rates have risen, with the pivot point being the 5-year rate. 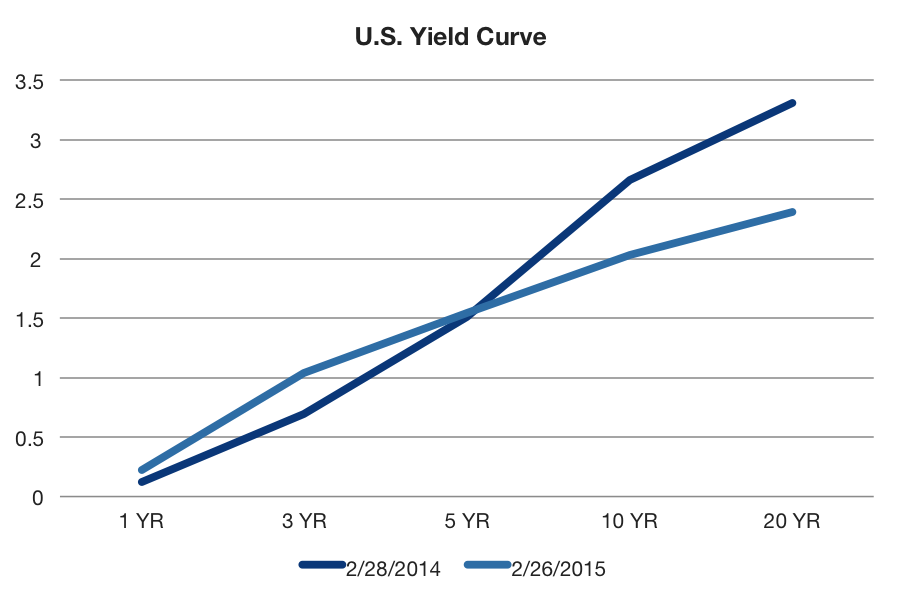 How the dynamics of an increase in rates will play out within the yield curve is unknown.  The evolutions that unfolded during the last several rate increases were totally unique from one another.  While 1993-1995 and 1998-2000 saw a fairly even level change across the entire curve, 2004-2006 was largely dominated by a change in the short-end (see our February 2nd commentary Duration Management May Not Be Enough for more detailed analysis).

Nevertheless, the 5-year may be the sweet spot going forward:

This improvement comes off new highs being made in US markets and growing strength in foreign developed equity markets.  Despite euro area woes, the iShares MSCI EAFE Index Fund (“EFA”) is up 7.00% year-to-date.  While EFA has consistently marched higher almost every day in 2015, it still sits approximately 6% below its July highs.

The large number of sectors exhibiting neutral momentum continues to put the portfolio in a fairly defensive stance with respect to the sort of drawdown that would be required to build a short-term Treasury position within the portfolio. 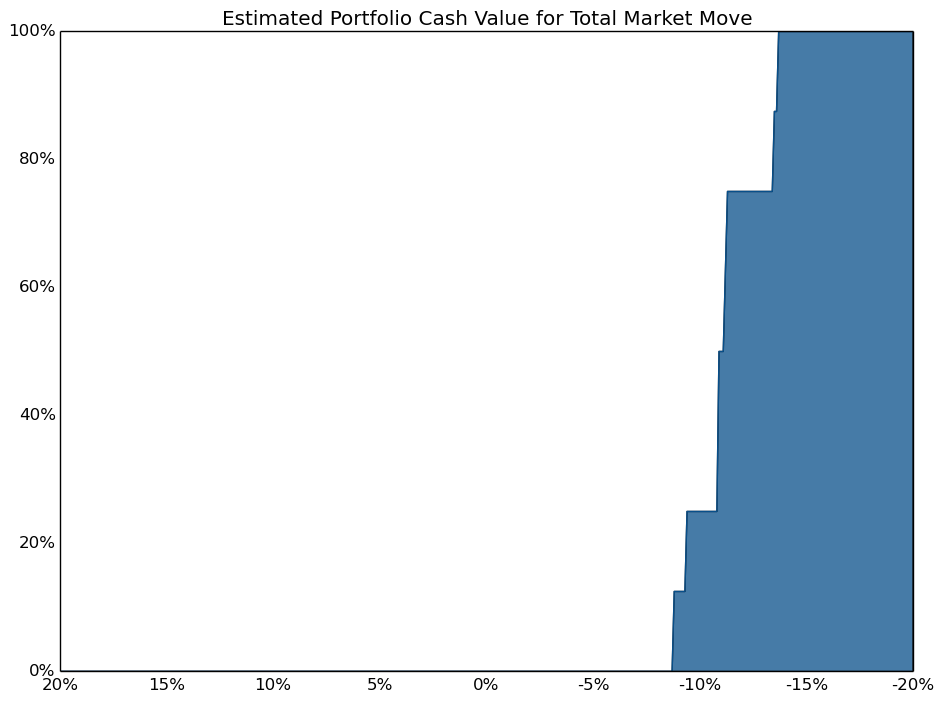 Corey is co-founder and Chief Investment Officer of Newfound Research, a quantitative asset manager offering a suite of separately managed accounts and mutual funds. At Newfound, Corey is responsible for portfolio management, investment research, strategy development, and communication of the firm's views to clients. Prior to offering asset management services, Newfound licensed research from the quantitative investment models developed by Corey. At peak, this research helped steer the tactical allocation decisions for upwards of $10bn. Corey holds a Master of Science in Computational Finance from Carnegie Mellon University and a Bachelor of Science in Computer Science, cum laude, from Cornell University. You can connect with Corey on LinkedIn or Twitter.