A PDF version of this commentary can be downloaded here.

Without a doubt, most recaps this week will be about the Greek debt deal, where Greece received a 4-month financial aid extension and in-turn agreed to honor all its debts. Markets seemed to take the news positively with the iShares European Monetary Union ETF (EZU) up 1.88% on the week and 1.58% on Friday alone. But we’ll leave it to the economists to speculate as to whether the game “kick the can down the road” is ultimately positive or negative for European growth in the long-run.

So with everyone’s eye off of the U.S., we thought that’s where we’d spend a bit of time this week. In particular, we want to focus on the relationship between value and glamour stocks. Our models are indicating that glamour momentum is beginning to reach extreme levels, a sign that markets may soon swing in favor of value. The last extreme glamour momentum reading we saw was on 2/7/2014. By the time our indicators peaked in favor of value extremism on 4/10/2014, large-cap value (IWD) outperformed large-cap growth (IWF) by 348 basis points. While we don’t usually try to capture such short-term market trends, they are powerful currents to be aware of.

We do this daily for 9 different ETF pairs (representing large-, mid-, and small-cap equities for Russell, S&P, and Vanguard methodologies) and add up the results to create a diversified composite score. 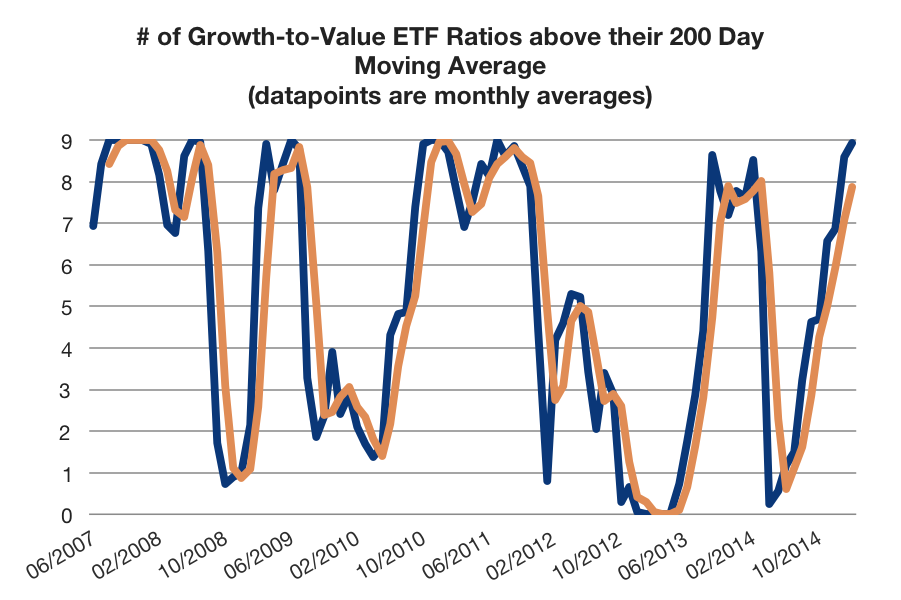 We can see that glamour stocks have hit all-time highs (9 is the maximum possible score) – though they haven’t crossed below the short-term moving average that would indicate a switch to value.
But has such a methodology been successful in indicating momentum swings in the past? Using the crossing of the short-term average as our signal, we built a dollar-neutral long/short portfolio using the ETFs IWD and IWF that rebalances at the end of each month. If growth is in favor, we are long IWF and short IWD; if value is in favor, we are long IWD and short IWF. The resulting equity curve captures the results. 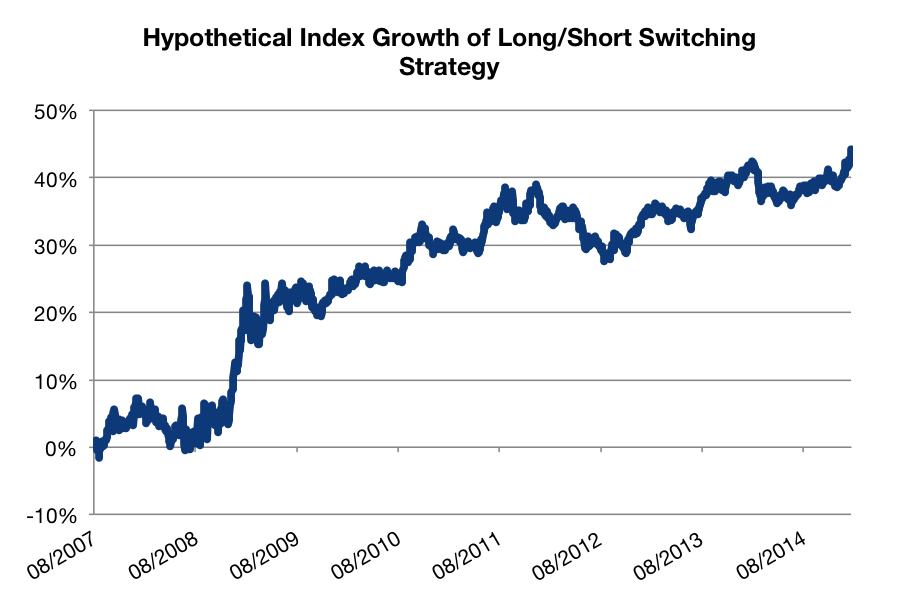 (Note: This performance is entirely backtested and hypothetical, and calculated with the benefit of hindsight. It is net of the underlying ETF expense ratio but gross of any advisor fees, taxes, or trading costs. August 2007 was chosen as the start date because it was the first date on which there was data available for all the ETFs utilized. The hypothetical, backtested performance does not reflect the actual performance of any portfolio, fund or account.)
Looking under the hood of these ETFs, we see two primary differences that may drive the growth/value evolution in the coming months. In IWD, we see a large tilt towards financials and in IWF we see a large tilt towards technology and consumer discretionary. While we can see that energy is a larger component of the value ETF, it is not due to the recent sell-off: these two particular ETFs are based on Russell methodologies and reconstitute their portfolios only once a year in the summer.We expect the momentum shift between value and glamour, at least in the short-term, will be largely driven by how relative strength among technology, financials, and consumer staples evolves. 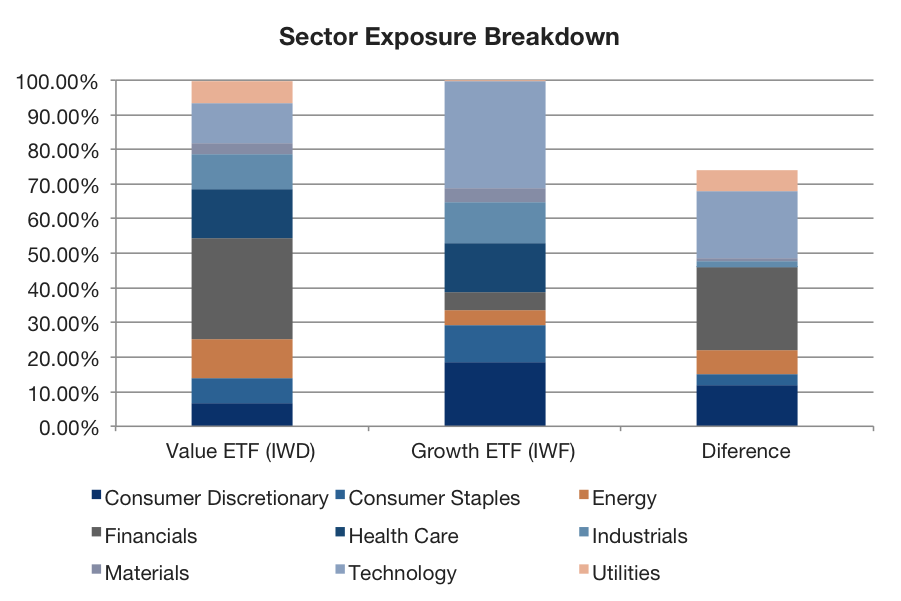 It is worth pointing out here that while value appears to be on deck, there is no reason why growth cannot stay in the driver’s seat for quite some time. We can see that from 6/2007 to 6/2008, growth was near extreme levels; we see a similar situation from late 2010 through late 2011. In other words, while there will likely be a strong opportunity to rotate towards value in the future, whether it is tomorrow or in a year remains to be seen.

Corey is co-founder and Chief Investment Officer of Newfound Research, a quantitative asset manager offering a suite of separately managed accounts and mutual funds. At Newfound, Corey is responsible for portfolio management, investment research, strategy development, and communication of the firm's views to clients. Prior to offering asset management services, Newfound licensed research from the quantitative investment models developed by Corey. At peak, this research helped steer the tactical allocation decisions for upwards of $10bn. Corey holds a Master of Science in Computational Finance from Carnegie Mellon University and a Bachelor of Science in Computer Science, cum laude, from Cornell University. You can connect with Corey on LinkedIn or Twitter.